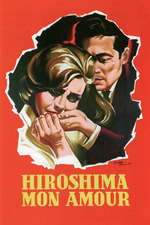 When a film wraps itself around your psyche and brings multiple ideas into varying perspectives, perspectives you have never dreamed of coming across, you have yourself something truly special.

I just want to speak about the opening fifteen minutes for now. We open with two people holding each other as ash rains onto them, covering their skin. We are then given overlapping shots of two others holding each other. The intimacy is clear and we feel the passion in their relationship, whatever it might be, in this moment. What comes next are shots of the disturbing and devastating results of the Nuclear Bomb in Hiroshima. Every so often, another shot of two coupe holding each other appears. Over this sequence is a one-sided dialogue between our main characters. We learn about what she has seen, or supposedly has seen. he connects herself to such tragedy and in response her Japanese lover replies, "You have seen nothing." Seeing as Resnais had been commissioned to create a documentary on the subject of the atomic bomb but created a fiction instead due to his belief that these events cannot be shown and experienced, this line reflects his motivations. These first fifteen minutes are Lui's tragic background, a truth in history, the documentary. For a majority of the remaining runtime we are then met by Elle's own tragic history. The past is brought into perspective in order to give us a glimpse into what Resnais possibly believed to be a defining aspect in what the human condition is made of.

If there is one thing that is constantly an issue in many film we see today, it's the delivery of exposition. Why is is that I am praising this film for it's delivery while I bash others? What writers see exposition as is a tool to teach their characters lessons. What more is that they don't actually show the story being told and decide to just focus on the character reciting it. With Hiroshima Mon amour, much like the recent film From What is Before, the exposition is for us to come and understand our character and her stance on her decisions. It isn't a tale of courage or redemption, but one of grief and sorrow. It is these traits that create the human being and with that, empathy. Resnais also decides to give us small flashes of the story she begins re-living in her mind. These small glimpses give us more of an insight into the way her mind is working. It allows us to not see the past, but she what she sees. Quite a brilliant use of the flashback and as it is, this film is known for it's revolutionary use of editing the past and present together. Without this film, what we know today would not be the same.

This becomes the type of film that becomes very objective toward what it presents us. We have two adulterers but we are not guilted into shunning them nor are we pushed to wanting something more for them. The passion between them gives us the foundation and they dynamic builds towards whatever it is you as a viewer wants to take away. Of the Resnais film's I have seen, this seems to be a common presentation technique. He wants you to take away what you might be able to find in the labyrinths that are his films. He understands that they are complex and played pieces of art and gives us the job to analyze and break down. I have much respect for a man so unafraid of the risks that comes with this as well I respect him for believing his audience to b made of intellectual human beings who have experienced life and share their experiences with those of the film.

By the time we get to the ending of the film and the final few words are spoken from the character's mouths, we come to a realization of what more this film might actually be about. Two kinds of people, both ignorant to the others time on earth. But is this a film about people or one about nations? That is a question I don't want a solid answer to. Both plausible outcomes share similarities however, one with a more personal and meaningful effect and the other that grasps the idea of an inevitable failure to understand each other. But both will touch upon what we know as the human condition. Is it a shared experience, one that no matter what will be understandable by everyone? Or is it an idea that can only be defined by the person describing their take on it? This, of course, is left up o you to decide.

There is still so much in this film I wish to unravel upon continuous screenings. This is the third masterpiece and, frankly, third film I have seen by Alain Resnais. He was an auteur of cinema, there is no doubt in that. It is because of what he brought to the screen that film is what it is today. There were others, I don't refute that, but he was one of them. His mysteriously beautiful films are not something to be missed. They are to be watched, over and over and over again.