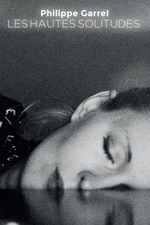 It's not shocking to learn that the subjects of this film have passed. Its silence and interaction evoke the sense I've extrapolated from previous Garrel works. His black and white photography, blurring the actresses into their backgrounds, amplifies the surreal nature of the filmic image; one that reflects on the context of a frame, for Garrel continuously pre and proceeds these ripe expressions and eloquent gestures with the thought that comes before and the deflation afterwards. With the context of Seberg's trauma, both physical and mental, her face instantaneously articulating persistent sorrow between the bursts of jovial smirks and soft eyes, the instances where she will look into the camera - only further solidifying that this unenforced breaking of the 4th wall is a genuine interconnectivity between life and its dead archive, as well as an immensely provocative gesture in its own right that is most profound on a very intimate and insular level - are stirring magnets that stimulate my own sadness.

Garrel encodes the reality beyond his images of it into the in-camera spurs of light and darkness, each exposure change a purposeful reaction to what he sees and how he feels. Such manipulation in direct accordance with the eyes of the respective subjects. On Mubi it is listed as an avant-garde work, but I'm more inclined to just place it under the distinction of documentary, because that's exactly what it is. A document of people in their solitary frames, at times confronting the artifice, at times the artifice confronting the gestured disposition.