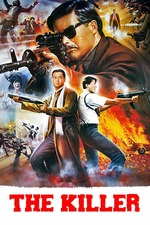 I'm starting to regret that I didn't get into John Woo sooner, but I'm also a little happy that I didn't. A younger version of myself would most likely have latched onto the shootouts here and nothing else, shouting ignorantly about how this is the bloodiest and craziest and most badass thing ever when there's so much more depth and complexity to it than just that. What makes Woo so great isn't his action, but everything he surrounds it with, from the colorful, angular visuals that make every character and building seem monolithic to the immense pain and weight of every bullet fired and wound opened. The quiet moments are what really sell this, though; John and Sidney affirming their friendship as they look over Hong Kong, Lee closing up John's bullet wound with gunpowder and a cigarette, Jenny picking up a gun for the first time in her life as her eyesight deteriorates just so she doesn't have to lose John again. Woo's brilliance is his vulnerability, his willingness not only to show the cracks in his characters but to present those cracks as the reasons why said characters are worth caring about. I think I'm in love.