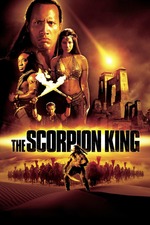 This past Christmas, inspired by the BalloonShop video Egg Nog, my friend Vince got our friend Kyle The Scorpion King 2: Rise of a Warrior, specifically on Blu-ray. Being the good friends--or willing hostages--that we are, together we undertook the endeavor to watch said cursed film. However, as the good film watchers that we are, we decided to watch the original to better understand the mysteries of the Scorpion King series.

With its completely out of place electric guitar score, WWE style action that has arrows pin people against walls, and female nudity scene that had my friend exclaim, “That’s not how hair works!” when it conveniently covered all the right spots, The Scorpion King is Monster Energy Drink if it came to life and made a movie. Created solely as a cash grab from the character’s uncanny appearance in The Mummy Returns, Rock “The Dwayne” John plays the titular character who defeats the evil emperor and *spoiler alert* becomes king. “But what’s his tax policy?” some of you are clamoring, and like all the hard questions in this film, the story cuts away before it has to answer any tough questions, especially the suspect need of the sorceress needing to mount “The Dwayne” as she heals him.

With all its stupidity, though, this movie has fun with itself. For a movie given little consideration in its production, the costumes and the sets are really cool to look at; plus, it uses a menagerie of real animals throughout its runtime. Even with its sloppy editing and unnecessary slo-mo, there are some neat albeit hammy camera zooms on focal points in action. The action just wants to have fun and show off the hero of the story, giving him the chance to ambush his enemies forces in a series of traps like something out of The Vindicators. And unlike other B-movies, the actors seem genuinely happy to be there, getting the chance to act it up 110%, resembling something like Tim the Enchanter in one scene, and in others, screaming full throttle into battle that gives equal opportunity to men and women alike. Miraculously, for an ancient Egyptian movie where everyone somehow speaks the same language, the roles aren’t all whitewashed. So it can be forgiven when this action-”adventure” movie does a cheap rip off of the Indiana Jones score or throws in convenient plot devices to make the story plod along, because you know exactly what you’re getting with Scorpion King. I just wished the horrible metal credits music convinced me not to go any further into this series.

The Scorpion King 2: Rise of a Warrior