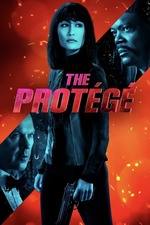 Every studio is looking for their own John Wick, even the studio that made John Wick in this case. Well the director of Casino Royale and umm… Green Lantern… ah jeez… brings a new film into the action genre. The Protégée has some entertaining action and performances, but it’s story felt like it was missing something and the writing at times was bad and painful to listen to.

After finding her in a situation no little girl should be in, Moody Button takes Ana under his wing as his protégée. Years later when Moody is murdered Ana must now track down his killer with the talents Moody gave her.

She may be the middle name on the poster but this is Maggie Q’s movie through and through, and she is great! She is fierce and kicks ass, a great action lead! Her relationship with Samuel L. Jackson’s character was always really nice as was Jackson’s performance. I really liked him in the couple of flashbacks with young Ana, I could have watched a whole film of that in all honesty! Of the three main cast, Michael Keaton was the weakest link. He was fine but his character suffers the worst from some not so great dialogue.

The action scenes are pretty solid all throughout this film. They are excellently choreographed and performed, and pretty brutal at times. It’s clear this was from the director of Casino Royale and for that I’m grateful. Definitely the film's biggest highlight.

The film has a pretty interesting plot and concept from the get go. “Mentor killed now their protege must avenge them”, nothing new but will definitely lend itself to some entertaining action. However, somewhere down the line I felt the film kind of loses itself in its own complexity. The trailers make you think Michael Keaton is the big bad of the film and that isn’t entirely false but there is more going on. You never get a good idea as to what his deal is. It felt like there was a whole backstory for his character that just wasn’t present in the film. The film would have benefited had him just be the big bad of the film and not just the henchmen of the film's big bad.

Michael Keaton’s character suffers from some of the worst writing in this film. A good few of his lines are bad but there is one that takes the cake. I won’t spoil it, because at least it is funny bad, but man did it make me cringe and in agony too. Here is a hint, it was part of a romance subplot that rivals Anakin’s and Padmè’s in who can have less chemistry. I must give Anakin and Padme this…. There isn't a 27 year difference between the two actors involved. Keaton just came off as a sleazy, horny old man and nothing else in this film, and I was kind of disappointed that our leading lady was actually into it.

Also this may be me looking too deep but Keaton's character is credited as “Rembrandt'' but I don’t think that is said in the film. In fact one character calls him “Michael” twice and I’m led to believe this was an editing mistake where the actor just called Keaton by his real name. I don’t want to assume the editing room was that lazy but when I don’t know something as simple as a character's name I’m not left with much to assume with.

There are good qualities to this film, Maggie Q and Samuel L. Jackson are great, and the action is top notch. That said it felt like there were parts of the story missing and Michael Keaton’s character was horribly written. It’s not a film I can recommend for the theater, but probably worth an… afternoon on cable.