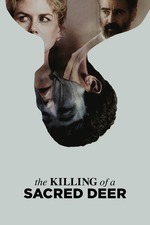 This review is way out of order in regards to movies I’ve seen and it’ll bug me for a bit, but I’ll get over it. I felt that this might be a good movie to return to Letterboxd.
Also, this review might be scattered af so bear with me.

Now, this movie seems to be an adaptation to Euripides’s "Iphigenia at Aulis", similar to the biblical story of Abraham and Issac in its ties to faith and sacrifice. Greek king, Agamemnon, accidentally kills a sacred deer that belonged to the goddess, Artemis. Because old-school Greek storytellers were all about the eye-for-an-eye style of justice, Artemis demands that Agamemnon sacrifices his daughter as penance. This tale serves as the skeletal structure for the film. (Helpful for me to understand what angle we’re coming from)
That being said, I took away several things from this movie, but one that seemed prevalent and interesting was the idea of the sacredness (roll credits) of human life. In the beginning we enter the film with a liking for all characters. Slowly as the plot unfolds I  start to feel bad for Dr. Murphy because he claims his murder was an accident, yet the price must be paid. So I end up turning on Martin, who seems to unjustly demand life-for-life payback. I began to see Martin as the antagonist until I learned that the murder of his father, happened during the surgery that Dr. Murphy operated drunkenly. So then I start to feel a shift of character roles as Dr. Murphy becomes the antagonist.
Regardless of accident or not, Martin’s father died under the hands of Dr. Murphy. (which if I remember correctly he didn’t take accountability for)
While this film sheds light on the eye-for-an-eye mentality, it brings to discussion the importance and equality of human life. I think that the directors visual intent on the homes was very telling to the inequality that took place among the characters. Murphy’s home was large and beautiful, and Martin’s was still charming but definitely smaller and set in a low income neighborhood. Was Martin’s father’s life any more or less important than the lives of the four Murphy’s? I don’t think so. Are the lives of people “less notable than us” more or less important? Certainly not. Although I don’t necessarily have a concluding thought on that, I found it very interesting.
Lastly, the idea of absolutes was brought to my attention. Both parents have two very different mindsets, one trying to find a physical problem and the other trying to find a psychological problem. Neither can be determined. So Martin swoops in and basically says they’re both wrong. Now, I could go on about the correlation of this film and man’s relationship to God, but I feel that if I tried to do that here, I’d ramble more than I already am.

Also, ending scene was the freakin cherry on top (or should I say ketchup on top).