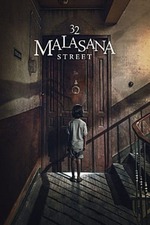 I really liked on how this film plays. It's a generic themes, but director Albert Pintó brilliantly put gothic element and atmosphere that makes it so cool and creepy.

Sadly, this film depend on its cheap jumpscares. I hate when horror films doing that. I feel like this film has something to explore rather than using jumpscares as a part of storytelling.

With its brilliant gothic element and creepy nuances, Malasana 32 could be a great horror film if, using less jumpscares and focused on exploring themes. But hey, you guys should check this out.