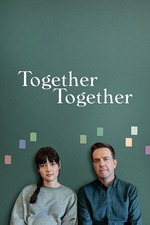 Some relationships don’t fit in a tidy box, or really any box at all. You’re more than acquaintances, even more than just friends. But it’s not exactly romantic, either. You share moments together, but maybe no more. You’re just together...together. Writer-director Nikole Beckwith takes some cobbled-together romcom traits and turns them into something just new and different enough in Together Together.

It’s easy to look at the marketing for this film and think you know what it is. We’ve all seen it numerous times-the unlikely couple that starts as friends, but eventually blossoms into a fully fledged romance. We all know the story, and Beckwith knows we know, sneaking in more than a few sly winks at the audience. Some range from subtle, such as Matt(Ed Helms) bringing a giant teddy bear to the doctor’s office in one of the very first scenes, to more on the nose, such as Matt and Anna(Patti Harrison) cringing over Woody Allen and his tropes. But for the most part, they are all well-done and provide a general easy-going romcom vibe that’s very welcoming.

Both Helms and Harrison seem to be playing themselves here-which isn’t a bad thing, as each is very personable with excellent chemistry. The audience slowly gets more and more knowledge about each person, and Beckwith does a good job of giving just enough to each on paper and letting the actors themselves fill in the blanks.

The story is split into three sections-or trimesters, based on the pregnancy. Each works well in the moment, and perhaps even more after it's all said and done. The first third works as a pretty standard romcom-some nice chuckles and a bright tone, leaning even heavier into the clichés that Beckwith purposefully includes. The middle section is probably the longest, and throws some of the emotional plot beats expected into disarray, giving the audience slightly more to consider while still creating a track for the easy ending. But then the third part comes around, and the clichés and tropes are thrown to the wayside, leaving an opening for the emotional ambiguity that best describes Matt and Anna’s relationship to come to the forefront. The ending further encapsulates that dubiety, leaving enough unanswered that the viewers own expectations and reality form the rest. What exactly is their relationship now? Does it even matter?

Together Together isn’t the most groundbreaking film, nor is it the best film of its own genre. But it completes the goal it set out to do, and is a very enjoyable ride doing so, buoyed by Helms’ and Harrison’s steady performances and Beckwith’s clever writing and pacing. It’s not a must see movie, but it’s certainly a recommended watch.