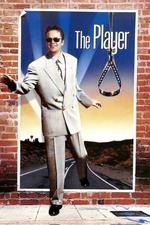 A studio executive murders a struggling screen writer who he believes has been sending him death threats and then falls in love with the dead writer's girlfriend. It's like the writers who are the fountain from which the films spring, are taking matters into their own hands after the thousands of rejections they've suffered. And who better to unsettle with death threats than the seemingly soulless studio exec played by Tim Robbins. He sort of represents the polar opposite of the creative side of the business. Although he's not quite Harvey Weinstein. Robert Altman seems to be saying that Hollywood is a bit of a cesspool that drains ideas of the essence of what makes them good in order to produce films that'll reach the masses who Hollywood has dumbed down over the decades precisely for that purpose, so that they can fed more mindless, highly profitable crap. If that's the case, then "The Player" is pretty damn cynical. While other films have mined the same theme, probably none have done it like Altman, whose films are recognizable for their style of spreading dialog among more than two people in the same scene so that you can get multiple viewpoints expressed with a lot of great acting and writing and just overall enlivening scenes in multitudes of ways without having a movie that runs for four hours. It's the antithesis of what Tim Robbins's character as a studio exec is looking for in a film, that it actually respects your intelligence and provokes deep emotions as well. The film's numerous cameo appearances just drives home the idea that they're all in bed together in a dubious enterprise, in spite of stars like the great Jack Lemmon, whose playing something on a piano at a party, who was in good movies and was uniformly outstanding.8