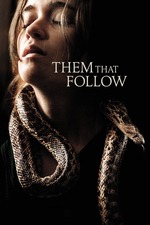 As a writer, whenever I see a movie, I usually never try and think about how I would execute certain scenes differently. This is mostly because it takes away from being able to absorb the full artistic intent of the film that I’m viewing. However, the entire idea of artistic intent is lost within Them That Follow, because not a single idea feels fully developed.

That’s not to say this film is bad, it’s just undercooked. This is one of the only times where I was actually thinking to myself how I would improve the film, because there is a good film hidden in this passive wave of mediocrity, but it’s not utilized in the slightest. Olivia Coleman and Walton Goggins give great performances, and there are some slightly interesting ideas at play, but overall it leaves nothing to discuss and nothing to ponder, which is the greatest sin any movie can commit.

The Purple Rose of Cairo