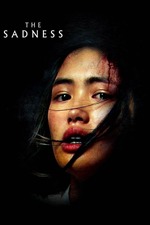 In Germany, like in most parts of the world, the pandemic brought out the worst in people.

A staggering amount of Germans was suddenly okay with marching arm in arm with literal, self-declared Nazis, again and again, loosing themselves in absurd, anti-semitic, hateful theories and demanding the normalisation of the very political viewpoints their parents and grandparents have held when murdering millions of innocents in industrial genocide factories.

Everyone I know knew at least three or four people personally who went down that route. Many big German celebrities were also among their numbers.

It was truly scary and disgusting.

A pandemic that sets free the basest instincts of the people, turning everyone into vile creatures who want to bring about a society that savours murder and torture? Yeah, I've seen that.

I'd like to see a sequel (actually, this would have been better suited for an epilogue, I guess) in which the pandemic is defeated and the murderous sadists get embraced back into society. Because that's what we're seeing right now in Germany. The majority of the newly converted national socialist crowd of 2020 is now repenting or simply ignoring their horrifying detour, hoping everyone just forgot, taking their established places in mainstream society back.
I don't think they will have a hard time getting what they want, as usual, and they will just return stronger and even more deranged during the next societal crisis, which will surely come sooner rather than later.

How would society treat these rapists and serial killers after being cured? How would one face their neighbour, who has cut off one's fingers - Or much, much worse?

Thinking about it, though - That plot would probably not make for a fun thrill-ride like "The Sadness" is, eh?

I've heard "The Sadness" be described as the "Serbian Film" of zombie movies. I'm glad it's not. It's fun. It's really fun. Somehow it manages to handle even its most distasteful ideas in a way that doesn't hit too hard.

Would probably make a neat double feature with "Train to Busan".