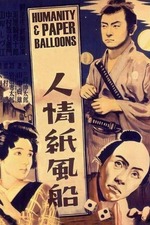 It's truly sad that Sadao Yamanaka died at the age of 28, a few months after completing this masterpiece. Based on this film, I'm sure he would have had a career similar to that Kurosawa, Ozu, Naruse, Mizoguchi, Oshima, etc. if he had survived. But as my LB friend Yaruse points out, despite the fact that only three of his films are currently available in complete form (apparently a few others exist in parts), he still managed to have a pretty fruitful career, making more than 30 films. He died in Manchuria, after getting his draft notice on the day of this film's premiere. I sensed a great deal of Renoir in this work, the same lightness of touch, the same sense of humanism. I can't wait to check out the Yamanaka's other two features, not to mentions those that exist in incomplete form.