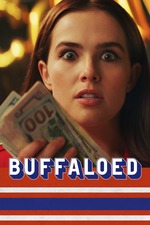 Zoey Deutch is literally a national treasure, who aces every single role she gets and just leaves me in awe. She is the reason I enjoyed my time with the movie, and I’m so impressed with her performance. Besides from that, Buffaloed tells an interesting story and is paced really well to keep you entertained. There’s certainly a few laughs to be had, the performances were great all round and the plot about debt collection was put across to the audience informatively yet entertainingly. It’s not a subject matter I knew anything about beforehand, but I understood everything perfectly. I enjoyed all the characters here, and no point was I not invested, and I had a great time overall.

Where Buffaloed struggles is with its underdevelopment, within both the plot and the characters. At times I felt it could’ve been a little longer, to give us more time exploring characters and getting to know everyone. There were scenes that had a bunch of characters on screen that we were supposed to care about, yet we don’t even know their names as they weren’t introduced. This movie isn’t unique either, this sort of film has been done many times, and this one doesn’t push the boat out. However, it was entertaining, well acted and enjoyable, which is all I can ask for.