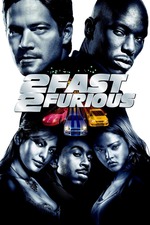 I honestly did not realize this was a John Singleton film.  For so long, I didn't pay as close attention to who was behind the camera of any movie unless it was so obvious I couldn't avoid it.  There is a noticeable difference between this sequel and the first film.

The only people returning for this sequel are Paul Walker (Brian O'Conner) and Thom Barry playing Agent Bilkins, who ran the FBI investigation.  Bilkins approaches O'Conner in Miami for the chance to clear his name by infiltrating a drug lord's organization.  When O'Conner accepts, he chooses his childhood friend Roman Pearce (Tyrese Gibson). Bilkins, partnering with US Customs, connects O'Conner and Pearce with another undercover Customs agent Monica Fuentes (Eva Mendes).  Through Fuentes, they meet the drug lord Carter Verone (Cole Hauser).

The theme of family is not as strong in this film as was apparent with Dominic Toretto.  We get the tension between O'Conner and Pearce due to Pearce getting arrested after O'Conner became a cop.  However, they maintain their brotherly bond.  Of course, if a better actor played Pearce, he would have expressed the relationship better.

I like the first movie better than this one. In the previous film, there was a broader exploration of the culture around street racing. This movie is more focused on the investigation into criminal activity. The cars fade into the background for the sake of CGI. The plot is generic, but the film depicts an excellent shell game as it races to its climax.

Over its entertaining, but it could be better.