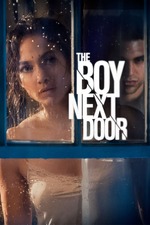 Recently rewatched, and am still standing by my original review for it.

I'm glad to see, however, that there was a positive review from film critic Ignatiy Vishnevetsky over at The A.V. Club back when the film was released. I didn't think it was possible, but our reviews match up quite a bit.

"This is all protect-the-nuclear-family stuff; Claire is being punished for considering divorce from her husband, from whom she’s been separated for nine months. (He had an affair with a secretary “at the home office,” an indiscretion calculated for maximum Formica suburbanness.) But the thing about The Boy Next Door is that it’s so exaggerated and crammed with references to Greek tragedy—which start awkward and pretentious, but become sublime around the point when someone gets an eye ripped out with an EpiPen—that it can’t help but come across as parodic. Intentionally or not, it plays like as a fun, loud parody of reactionary thrillers. And, regardless, big-screen releases this unabashedly trashy come once in a blue moon."