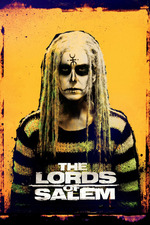 The saddest, darkest, most symbolic horror movie about drug addiction and relapse.

Almost like a lowbrow, forgettable episode of The Twilight Zone, the plot for Rob Zombie’s The Lords of Salem is downright silly. The movie, itself, has sequences both predictable and somewhat schmaltzy (like when a protagonist goes to a “witches of Salem” expert for information on the “curse of the Salem women”). Let’s just lay it out there as quickly and painlessly as possible - you don’t approach The Lords of Salem for the originality of its writing or its utilization of horror contrivances. You approach it in a similar vein as the films of Lucio Fulci, Jesus Franco, and Jean Rollin. Genre filmmakers that stretched the bounds of cinema itself in order to shade their preposterous stories with a visual and aural experience that heightens and adds pathos themselves. And while Zombie is influenced (you can name many directors of yesteryear, here - from Polanski to Kubrick to Ken Russell to Jodorowsky and to the aforementioned Fulci), there’s something so fascinating about his marriage of music and visual composition. There’s something frightening about it on a surface level, and there’s something seriously commendable about how it tells the deeper layers of the story in such a way rather than through literal exposition.

It’s painful to watch a Zombie film, because his world exists as a place of no hope. In his films, evil always prevails. It’s always vicious, ugly, and never sensationalized. It’s all excessive grit and purely unavoidable. The heroine of The Lords of Salem is falling into a situation that she has no control of, and Zombie toys with the audience’s head that there is no chance for a safe exit. Not many horror movies dare to do that much anymore, nor so earnestly.

The multiple dream sequences and nightmares throughout the film feature a demon walking a goat on a leash, while the art direction itself includes an apartment that is painted in murals of images from Georges Méliès's A Trip to the Moon. Genre tropes are often embraced, and then at other times subverted. There’s also a scene where a woman is shown giving birth to a squid demon, hallucinations of wallpaper bleeding, swinging lights from the ceiling, and a turkey-shaped Satan that delivers dual phallic umbilical cords to the heroine.

It would be so silly and ridiculous if it weren’t so methodically directed and underlining something more heartbreaking.

These visual pieces peppered throughout the film aren't supposed to be taken at a literal level of the story, but on an animated level that puts an otherwise realistic horror tale into this varied presentation of horror genre aspects. In that regard, there’s the added sentimentality that our heroine is a recovering drug addict, and an avid “metalhead” that fits right into Zombie’s canon of characters. Whereas the horror imagery stacks and stacks, the viewers are placed in a position - alongside supporting characters - of her downfall into the supernatural entities at play and what that appears to be in the eyes of those who have experienced her troubled history, and what she herself might think in that regard. It’s a troubling subplot, but it gathers most of the horror in the material beyond the sensational setpieces. There’s even a dual presentation between those images, too - as the addiction of her character is literally placed into the imagery (for example, when she sees the demon walking the goat in the park, she happens to be walking her dog, too).

The very reason for Méliès' imagery being used is influenced, but not in a way that feels imitated. The Lords of Salem quite literally connects its Satanic horror with art itself - film, music, literature all make appearances in the plot, or in the set decoration. It's an art-loving movie, in that regard (since Zombie is an art-loving artist, period). Sincere in its appreciation of visual design to a degree where the plot itself becomes less and less silly, and more of an experience of the senses.

Zombie also doesn’t shy away from using The Velvet Underground as an occult anthem. “Venus in Furs” going from harmless music fandom in one scene, to a drug-induced repetition in another, and then an orgasmic display of horror that becomes the epilogue to the film by way of the band's track “All Tomorrow’s Parties”, from the same album The Velvet Underground and Nico.

In Zombie's viewpoint of the world of evil, everyone's wearing a costume (for example, the song by Velvet Underground and the peppering of classic films showcasing evil creatures wearing masks); making the film feel downright unbearable in its allegorical connection to the character’s traumatic past of addiction. He takes horror from something relatable, something that is more suited to a tragically dramatic character study, and finds his way of presenting it as means for terrifying, old-fashioned, and subversive horror storytelling.

It's a film about drug addiction. And it's unsettling being told in such a way. As an evil. As something that blocks any hope of being the same again.