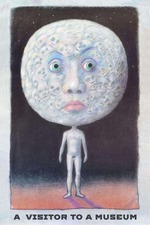 Hell. It hath not frozen over but merely become our world past recognition. Landfill is the landscape, garbage encompassing the world as far as the horizon goes; oceans polluted with chemicals, and receding until there becomes nothing but a blank, cracked canvas of a wasteland; people endure, reduced to shells of their former self; and language degenerated until we all become denizens of Babel.

What happens when so much concentrated filth accumulates in one locus? Corruption emerges, filth begetting more filth, and soon it takes accord of itself as it spreads, seeping slowly into the countryside with no one left to stop it – but is anyone left who cares?

Hell. At the innermost depths, at the bottom of the pits, in the final, ninth-circle, there is a stairway that leads back to heaven. When the route up above is closed off from us we despair, seeking any possible way to ascend. And when the only path left involves descent into madness the desperate few who remain will risk their sanity for salvation.

What happens when both hemispheres lie on this earth, allowing us a way to spiritually progress through physical means. Geography then becomes a terrain for the soul, a map to the stars should we seek such an end. Earth as purgatory.

Hell. A place born from man seeking knowledge. What more then, is a museum but a concentrated fruit of sin, emblematic of man defying God and forsaking faith; but knowledge isn't wisdom and information on its own is nothing and for all the humanly accomplishments we've made it means nothing in the grand scheme of it all.

What happens when we are confronted with this truth, that oceans will come cover up civilization? A museum becomes a mere bunker when reckoning comes, a space for those not saved to weather the oncoming apocalypse.

Maybe all that's left is doomed to rot. That is the salvation we find down below.