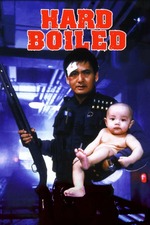 If there was ever a movie that told you everything you needed to know in its first ten minutes, it's this one. Chow Yun-fat playing clarinet at a jazz club. Night-time neon signs spliced with news clippings of shootouts, and a teahouse full of men, money, birds, and bird cages. A man named Tequila. A man named Tequila in a fifty-man shootout with guns hidden in every birdcage. There used to be a teahouse here. There used to be men here too. "A JOHN WOO FILM"

There is absolutely no way I could ever do justice to the sheer incredulity of the action within, but even beyond having the best gun choreography I've ever seen in a film it also has some of the best melodrama too. Chow Yun-fat and Tony Leung play two sides of the same coin, a police-man taking vigilante justice into his own hands when the law fails him and a gangster playing every angle he can because he belongs to no side. You've almost certainly seen this all before, but what you haven't seen is just how tender this camaraderie-cum-rivalry can be. Smiles are shared, gazes are glanced, roses are sent, lives are given. The final hour of this undercover saga is filled with a stunningly-coordinated battle synchronicity that could only come from two friends, two teammates, two partners in love.

"Do you think love can bloom, even on a battlefield?"

"Yeah. I do. I think at any time, any place, people can fall in love with each other. But if you love someone, you have to be able to protect them."

Oh sorry, that wasn't a quote from the movie, it's from Metal Gear Solid. I just thought it was apt since John Woo writes love stories... with guns.