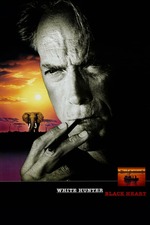 It's easy to point at a successful string of films in a director's catalogue and go "auteur theory", that there must be something they're doing that's ineffably right which no one else could do in their stead. They're a genius now of course, someone with a unique vision that should be given everything they need to create their works of celluloid art.

This is also how you get the famous directors with infamous horror stories. Hitchcock, Kubrick, Polanski, even David O. Russell of all people, and in the case of White Hunter, Black Heart we add John Huston to the list. In the film we tail Huston, played by Clint Eastwood who also directs (there's almost-certainly a whole other essay to unpack here), as he makes his next film The African Queen. He insists on going to Africa to shoot, during a time when location shots outside of the US were rare. Okay, sure, Huston's a genius after all. He then insists on hunting an elephant for the sake of satisfying his ego. ...I guess??

Everything else quickly falls to the wayside, and it becomes painfully obvious that this film will not be made until Huston gets his trophy. Should we just let him get it out of his system so we can go back to making the movie? Should we stop him from doing something this absurd because it has nothing to do with the movie? Everyone around him is too afraid to challenge his egotistical hunt, falling back on the belief that "a genius is a genius" and to compromise an inch would ruin what could be a masterpiece. even if said masterpiece has nothing to do with the compromise.

If it's too easy to draw parallels to colonialism, it's probably because it's just true. There is no need for Huston to come over, no need for him to hunt an elephant, but he does so anyways because his egocentric urge to conquer is indicative of how colonial urges still run rabid, Hollywood itself one of the greatest forces of neocolonialism that breeds men like Huston. I don't think you could argue that the ending says anything but.