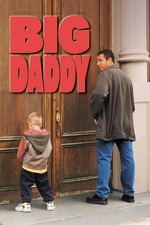 "from now on, you do whatever you wanna do, and I'll show you some cool shit along the way. that's what it's all about."

due to the fact that I've seen this movie approximately 900 fucking times in my life I am pretty much entirely incapable of being objective about it so sorry about that! (but also not really!) I was pretty much raised on adam sandler movies (billy madison, 50 first dates, mr deeds, click, the wedding singer), but ever since I was a kid this one has always been me and my dad's very favorite movie to watch together, so obviously I have a huge soft spot for it lol. also when my gf and I first started dating, we found out that we both loved adam sandler movies growing up—but specifically big daddy—but it wasn't until our third anniversary that we ever actually watched it together, and kept quoting practically every line to each other lmao, so that was nice and all 🥰

also it's always so interesting rewatching films that I loved when I was a kid bc not only do I actually understand jokes that completely flew over my head back then, but also with the hindsight I've gained by becoming an adult it also makes me realize certain things I'd never really thought about before! like on this viewing I thought about it for a second and realized that phil and tommy were probably the first depiction of a gay couple I ever saw onscreen?? and you wouldn't expect it from an adam sandler movie made in 1999, but weirdly enough, aside from a few dumb jokes (and that one friend of theirs whose character is literally only ever seen giving them nasty looks whenever they kiss or show affection to each other?? that dude can eat shit) their relationship is actually portrayed very lovingly and kinda sweet? and it's cute! also, this was within the past year or so, but I also realized that I had a HUGE crush on leslie mann when I was a kid but just never really understood that that's what was happening lol. I was always just like "wow she's so pretty! and blonde" LMAOOOO

Professor Marston and the Wonder Women