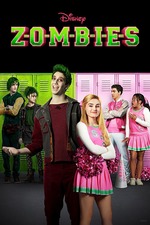 I watched this with my nieces and nephew bc it's currently their favorite movie of all time, which means they're ALWAYS talking about it and singing the songs from it, so for quiet time that day I was like "fuck it I gotta see what all the hype's about!!!" and you know what! I actually enjoyed it, albeit in a so-bad-it's-almost-kinda-good way! like if it were any other movie I'd complain about how it couldn't decide if it wanted to be self-aware or not, or how hilariously awful the dialogue was, but I had so much fun laughing at AND with it that I literally could not give less of a fuck LMAO! (also fuckin obviously it's a kids' movie so what I think of it literally does not matter!! my nieces and nephew love it so that's really all that matters to me 😌 I love that for them!)

one thing I did really like was that bucky was a cheerleader and it just....wasn't a big deal at all?? and there were a few other male cheerleaders too! idk maybe I'm being dramatic but that kinda thing would not have happened in a DCOM from like 2007 (at least not without lightly homophobic jokes at his expense lol). and that fuckin "BAMM" song is legitimately a banger! oh man oh man I'm the man bet you can't do it like I can!! (he's right I can't!)