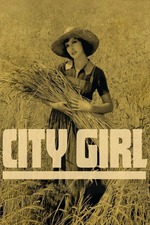 Lyrical silent film is one of only four Hollywood films made by the German expressionist master F. W. Marnau of which one is now lost. This ranks right up there with his other masterpiece "Sunrise" and was the inspiration for Terence Malick's "Days of Heaven". The story shares many themes with "Sunrise" in that it is about love and the struggle between city and rural life. A naive wheat farmer's son (Charles Farrell) from the Mid-West is sent by his tyrannical father (David Torrence) to Chicago to sell their crop for which he gets a lower price than what his father anticipated. He meets and falls in love with a struggling but feisty young waitress (Mary Duncan) in a diner and marries her. Their joyful return is welcomed by his loving mother and kid sister but his father, angry at the low price received for his crop, blames the girl and outright tells her she is not welcome. During an angry skirmish the old man strikes her when she stands up to his bullying and her husband cannot bring himself to stand upto his father. The following day a group of rowdy and leering harvesters arrive and make a play for the girl. One man, sensing the tension in the house, tries to seduce her into running off with him which is witnessed by the old man who tells his son. Heartbroken that her husband does not believe her she leaves a note behind that she loved only him and disappears in the night. Like all silent films the actors work at fever pitch during the emotional moments with Torrence's stern father coming off glaringly as a caricature. Marnau brings his signature look to the film through dramatic lighting shot by Ernest Palmer. The scenes in the city are sharply lit while the interior and night time moments at the farm are bathed in dramatic shadows which emphasise the young woman's sorrow and feeling of entrapment. Like "Sunrise" this too has stunning imagery throughout. Both Farrell and Duncan are superb and one of the most memorable scenes in the film is of the two arriving at the farm and deliriously running through the wheat fields with the camera following them and capturing their joy and love. The overwrought plot may seem rather excessive but it still manages to be extremely moving in a dream-like way. A must-see.