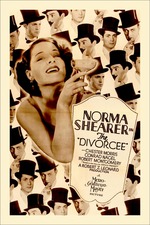 Early pre-code talkie, based on the scandalous bestseller "Ex-Wife", was then considered revolutionary with its frank views on female sexuality and the sexual double standard amongst the "in-crowd" of New York high society. A happily married woman (Norma Shearer) discovers on her third wedding anniversary that her husband (Chester Morris) has cheated on her. When she confronts him he admits to the affair but is blase about it saying it didn't mean anything to him. So she decides to also have a fling and takes up with her husband's close friend (Robert Montgomery). Upon discovering his wife's infidelity he divorces her. She finds temporary solace with another friend (Conrad Nagel) who has always loved her but she can't forget her husband.
The role changed the screen image of Norma Shearer who was one of the top stars at MGM and married to the boss producer Irving Thalberg. The film's success (and help from her husband) allowed her to follow with a string of very high profile projects on screen through most of the 1930s. Sadly she is totally forgotten today but the film is a reminder of her vivacious if rather artificial on-screen personality, her great beauty and her memorable speaking voice which helped her make a smooth transition from silent films. As in most early talkies the camera is totally static with the actors moving as little as possible in order to remain within range of the sound microphones. Historically important film seems terribly dated now but was a huge hit for the studio, won an Oscar for Shearer and nominations for the film, the director and the screenplay.