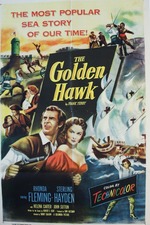 Old fashioned swashbuckler, based on a bestseller by Frank Yerby, has wooden Sterling Hayden as a french sea captain clashing with a female pirate (Rhonda Fleming) as they take on the Governor of Cartagena (John Sutton). The Franco-English-Spanish War of the 17th century is the backdrop for this adventure film involving sea battles, gold bullion, a kidnapped heiress (Helena Carter) and the hangman's noose. Totally unspectacular despite a couple of well staged action sequences. It merely apes far better films from the genre. The colour cinematography is stunning to look at as is the lovely Rhonda Fleming in a feisty role.

Fear in the Night