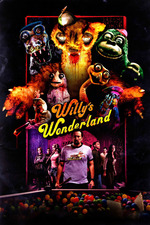 Willy’s Wonderland reminded me a lot of Drive-Thru in terms of being a film with a fun concept, decent killer design, a generally favorable horror atmosphere, but somehow lacking the spark, the heart, to lift an enticing concept into something magical.

There’s magic at the heart of this. Nicolas Cage plays a silent man who, after his cars tires are hit by rogue spikes on the road, strikes a deal with a local businessman: spend the night cleaning up an old Chuck E. Cheese type establishment as payment for a new set of tires. Naturally, it’s a trap—the animatronics within are alive, possessed by evil spirits, awaiting their next sacrifice. Naturally, Nicolas Cage knows it and he came to play.

It’s a shame the decision was made for Cage’s character to be completely silent. There’s parts that work—Cage puts forth a determined performance as the avenger. He’s brutal and single-minded. And he takes unexplained breaks to drink some sort of grape cola and play pinball, regardless of what else is going on in the building. This quirkiness works, but his total, utter silence is disappointing. That final act needed him to crack, to start spewing rage at the machines. I’m not asking for backstory. Nah, don’t explain a damn thing. Leave that pinball obsession a mystery. I loved it. I’m just asking for NICOLAS CAGE.

As for kills, well, they’re there. They’re gory and at least one with a color-shifting, tongue-shooting frog is creepy. Overall though? Generic and forgettable.

The real highlight is when Cage goes apeshit on the machines in devastating head to heads. Animatronics get thrown, smashed, hit, beaten, stabbed, burned, whatever he can to turn them into garbage. They give as good as they get, leading to these fights being especially standout and worth the price of admission.

I do wish more was given to make the film unsettling. Again, there’s a heart that’s left only half-beating. The building is creepy and we occasionally see the animatronics in shadowy claustrophobic hallways. Unfortunately, the monsters fluctuate between being clearly people in suits or being not-natural-enough CGI. Of particular offense is Siren Sally, an evil fairy ballerina that could have been one of the most frightening thanks to her combination of attitude and wall/ceiling crawling gymnastic abilities. But she NEVER looks like an animatronic. If we’re doing a Five Nights at Freddy’s movie, this concept hinges on stirring up images of those creaky old robots. The design is ALMOST there, but shows too many seams. They look too human, too much like a guy in a mascot outfit, the actors MOVE too human, not like rusty hinges and hydraulics inhabited by the spirits of Satanic killers.

But you come back around to Nicolas Cage beating the shit out of them, and you forgive a lot. Honestly, if you’ve come for that, you’ll have a good time, smile, then wash your hands of this movie forever, no regrets.