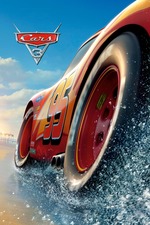 Somehow, this is less essential to the Pixar canon than what Cars [1] (and even Cars 2 to an extent) brought to the table. Cars was an accidental Marxist propaganda about the oppression of Route 66 in terms of the small businesses working there and the Interstate overshadowing them. Cars 2 was intentional propaganda for alternative fuels being not the ones from greedy corporations and having a pro-eugenics stance. The latter was the inner brainchild of John Lasseter from the success of the first Cars film, his neurosis is on full display there and for better or worse, was critically panned.

Cars 3 was the elites planting the seeds for the global pandemic. For a film that was released in 2017, it's setting is closer to Blade Runner 2049. It's an elite neoliberalist scorning at the public: "you will own nothing and you will be happy."

The film is about the formerly ignorant wielder of privilege Lightning McQueen after experiencing anxiety from Jackson Storm and the newer gang of racers, so he breaks down at a race. Four months pass and he is later relocated to a training camp where he meets Cruz Ramirez. The two go on a journey through the self and ultimately end up with McQueen at the sidelines and Cruz at the race.

With the advent of videogames such as Forza Motorsport 7, Forza Horizon 5, Gran Turismo 7, and even earlier titles like Flatout: Ultimate Carnage and R: Racing Evolution, why bother with watching Cars 3 at this point in time when you can play these games and have a better, not dumbed-down experience? The soulless computer animation looked okay for its time, and you already have a life to live. At least the first two films had much, much stronger points for being a linear narrative than this one. This is where I believed Pixar as I knew and loved them died.

Therefore, perhaps Cars 3 is the most important film starring Larry the Cable Guy in the Pixar canon, because it proves my point that Pixar films at this point in time do not suffice, maybe with Incredibles 2 being the exception.