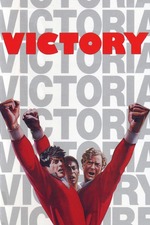 It's kind of delightfully absurd to watch Sylvester Stallone and Michael Caine play soccer against Nazis as prisoners of war.

This one has kind of slipped under the radar. I was able to rent it on the iTunes Store, but only a low quality version, looking almost subpar to a DVD. Maybe Sly thought it would be another Rocky, but..no.

I enjoy it at times though. It's needlessly long at two hours, the first half of them rounding up the players and forming an escape plan is the best. After that it dawdles and the ending is just pure predictable schmaltz, and not even that well filmed. I like the notion of a movie with Sly and Nazis though, and he isn't even skewering them on American flags. He actually..acts a little, but the script isn't strong enough to be a great film about tyranny and perseverance, nor does it completely lean into the absurd and just have fun with it. Either one could've been better, especially the latter.

Halloween III: Season of the Witch