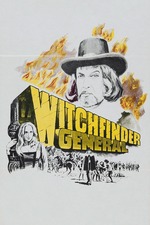 The most infamous witch-hunter in history was Matthew Hopkins who reportedly executed 300 "witches" between 1644-1646. He was at the height of his career during the English civil war and made a sizable amount of money traveling from town to town ousting accused citizens. Witchfinder General is a fictionalized account of Hopkins' (played by Vincent Price) reign of terror.

Most of the film takes place in Brandenston, a small village in Suffolk, England were a young women named Sara (Hilary Dwyer) lives with her Uncle who is a priest. Her lover, Richard (Ian Ogilvy) is a Roundhead soldier who comes home on leave to visit her. Her uncle warns Richard that trouble is coming to the village and that he would like him to marry Sara and take her away. Richard promises to return to marry Sara but goes back to his regiment as his leave is up. Unfortunately, Hopkins and his ghoulish assistant ride into town while he is gone and wreck havoc on both the priest and Sara's lives.

Witchfinder General is infamous for its fairly graphic violence and torture scenes which were considered intense for the time period. Hopkins' methods of extracting confessions from his victims were harrowing and included sleep deprivation, slicing them with knives, and his dreaded swimming test. In this test the accused were bound up and thrown into water. If they "floated", or tried to swim to save themselves, that proved they were guilty of being a witch. If they sank and drowned then they were innocent. This technique is depicted in the film with an almost documentary-style feel which makes it even more agonizing to watch.

Many say that Vincent Price's role as Hopkins is one of his best, and I would tend to agree. The director, Micheal Reeves, famously told Price to tone down his "overacting" and the result was an understated and sinister performance. Price exudes dark energy throughout the film and his imposing height and regal bearing make him a formidable villain.

There was special care given to the depiction of the English countryside and the cinematography and framing are gorgeous. The juxtaposition between the rolling green hills and serene forests and the horrific activities going on is intriguing. Society was experiencing a sort of temporary insanity where superstition and fear overtook logic. Such a beautiful land marred by the disgusting way that mankind treats each other.

While Witchfinder General didn't find much acclaim when it was released, partly due to it being heavily censored in England, it has since been reevaluated as a cult classic and grisly historical horror. The ending is incredibly haunting and will stick with the viewer long after the credits have rolled. Reeves was very young when he wrote and directed the film and tragically he spiraled into a depression after making the film and died from an overdose of barbiturates. He didn't make many films, but Witchfinder General was his most influential addition to cinema.