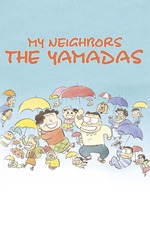 My Neighbors the Yamadas

And so we bear witness to the chronicles of a middle-class Japanese family in Haiku form; small vignettes of day to day life that might at first seem to float about like a feather in a breeze, yet collectively form a beautiful portrait of the life we all live and breathe daily, in all its mundanity, whimsy and beauty.

Whilst family life might have evolved somewhat from the era of Ozu, the core remains the same; that love makes everything worth bearing and we see patriarch Takahata offer such a sentiment in his passionate but off the cuff wedding speech late in the film. The family seem very content to take life as it comes (a lovely rendition of ‘Que Sera Sera’ sets the scene), which is a refreshing burst of realist expression within a history of cinematic “follow your dreams” philosophy.

The vignettes are often funny, nearly always relatable and transcending the cultural barrier and at times absurdist and whimsical, one of many favourite moments being a mock samurai showdown in front of the television set between the mother and father of the family. Throughout we are given titles that nod to the next vignette or two (“male bonding”, “breakfast of champions” or “art is brief, life is long” for example), and how different family members interact with each other, the youngest member of the family Nonoko getting the least screen time in comparison to the other family members, but no less significant, as if she might be the quiet observer that we view the family through.

We feel for a young boy receiving his first phone call from a girl which moves from sheer embarrassment to exhilarating joy, or marvel at the balls on grandma as she exudes wisdom in dealing with motorcycle hooligans, we fear for a little girl that is accidentally left behind at a shopping mall, or a father who just wants his family to share a moment of the season’s first snow, whilst they huddle around the television set. All emotional beats are covered here, all individual and family flaws transparent, and all connections solid as they move through life as it comes at them.

The animation style, whilst a far throw from what we are used to from Studio Ghibli, and the world that Takahata’s compatriot in Miyazaki has offered up over decades, yet the first “digital” Ghibli film benefits from the simple watercolour style, echoing the comic strip it was inspired by. It’s refreshing, and honestly exquisite, nodding towards Takahata’s final film (Oscar winning) also in watercolour The Tale of Princess Kaguya. While his unbeatable masterpiece The Grave of the Fireflies will always be his crowning achievement, My Neighbours the Yamadas is a wonderfully memorable entry in this master animator/storyteller’s cannon.