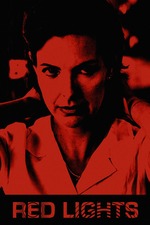 “I’ll drive nicely, carefully, without going off the tracks. You know which tracks I mean?”

A pretty compelling little French thriller that sadly doesn't quite handle it's narrative deceptions as skilfully as it could have. Feux Rouges is thematically interesting with an obvious focus on role reversals in modern marriage and the disempowered male and also contains a tremendous performance from Jean-Pierre Darroussin as a man fiercely determined to claim his manhood back, even if it kills him. In the hands of a more skilful filmmaker, I think this could have really hit the mark, but lets just say it's got a bit of M. Night Shyamalanitis, and in that sense, comes of slightly clunky in it's trickery and overall execution.