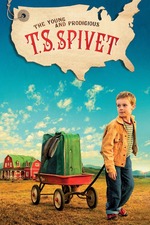 The Young and Prodigious T.S. Spivet

''The amazing thing about water drops is that they always take the path of least resistance. For humans it's exactly the opposite.''

Jean-Pierre Jeunet (Amelie, Delicatessen, Mic Macs) brings his trusty brand of whimsical adventure and magical realism to the Montana countryside (although most it the film was shot in Canada) for an adaptation of 'The Selected Works of T.S. Spivet', written by Reif Larsen.

Boasting some of the most luminous cinematography you could ever dream of seeing (courtesy of newly developed Arri Alexa camera's) we are introduced to a family in a rural setting where our young and prodigious protagonist is a 10 year old boy named T.S. who is focused on scientific experimentation and invention. His father is ''a cowboy born a hundred years too late'', his mother is obsessed with the study of beetles, his sister dreams of being Miss America and his younger brother is an odd duck, who in the early scenes dies in a mysterious shooting accident.

Whilst the plot in which T.S.'s invention of a perpetual motion machine lands him in the predicament of having to run away from home to accept his prestigious award plays out with the familiarity of a road movie, what Jeunet brings to the table as a point of difference is the way he paints his characters with adorable quirks and ticks and the way he fills every single frame with visual flourishes of wonder and delight. As expected everything is eye candy, and the films adventurous spirit is hard not to love, and while the positives far outweigh the negatives, I can't help but feel a little underwhelmed by the imbalance in tone and the way drama is sidelined for moments of humour. The story tries to deal with some complex family issues but never seems to explore them at any great depth especially with the wonderfully talented cast available to do such heavy lifting including Helena Bonham Carter. My first impulse in thinking this could easily be recommended as a film that a youngster could watch, was sadly discarded with the single use of the word ''Motherfucker" at a very unnecessary moment in the films climactic scenes, which forced me to question what audience the film is targeting.

If you are a fan of Jeunet, you will no doubt snap this up as soon as you possibly can, and whilst I can easily admit I was charmed and entertained throughout, I feel his work is becoming less fulfilling with each film he makes.