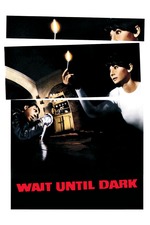 Audrey Hepburn in this Oscar nominated performance is revelatory as a blind woman besieged by some bad dudes that try to play on her vulnerability in order to retrieve a drug-stuffed doll that has circumstantially found its way into her possession via her photographer husband. Mind games ensue, but it isn’t long before all involved realise that this woman is as smart, strong and perceptive as she is vulnerable. Alan Arkin plays a creepy as hell baddie which makes me wonder why he didn’t play more!

Despite some minor contrivances that come with the territory of a film based on a stage play trying to work cinematically, the staging and writing are stellar and the direction from Terrence Young (of Bond movie fame) in and around one apartment really just works.

I was on edge throughout and wondered where the hell this flick has been all my life. Despite a few exterior scenes and an airport-based opening to set it all up, this is a perfectly executed “Single Location film”.

The Trip to Italy