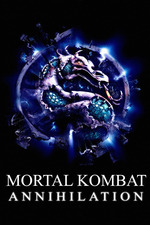 This sequel is even more terrifyingly awful and hysterical than I remember. I think it is pretty much in the realm of some of the "so awful it is great" c-movies ever made now. And the CGI in this one might be some of the worst ever put to use in a major motion picture.

This wastes NO time - from the very opening scene it is hilariously, terribly, wonderfully awful. It is like a 100 minute car crash, you cannot look away from the bad effects, cheesy costumes, ridiculous overacting, terrible dialogue and fist-pumping score (at least that part is positive).

I think the music is one of the only saving graces - the best version of the Mortal Kombat theme ever made (the correct title is "Encounter The Ultimate" by The Immortals), and when Jade first appears I heard the track "Conga Fury" by Juno Reactor, which just slaps. I couldn't for the life of me remember where I had heard that before, then I realized it is one of the main tracks in the Animatrix short "Final Flight of the Osiris".

Look, I kind of like that they throw in every remaining MK character here - Shao Khan, Sindel, Jade, Mileena, Motaro, Sheeva, Baraka, Cyrax, Sektor, Kabal, Ermac, you name it, they're here. But holy shit what a goddamn shitshow of a movie. As someone put it "Imagine how bad the script has to be for Christopher Lambert to refuse to return". That pretty much sums it up. GOD GOD GOD AWFUL movie (..with a bitchin' soundtrack).