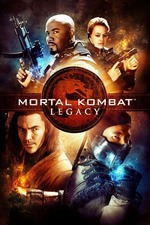 MK: Legacy was a two-season webseries released between 2011-2013 (after the director released a single short that got some internet buzz, called Mortal Kombat: Rebirth), in nine-episode long seasons where each episode was about 10 minutes long. It was the first attempt at a more grounded, "real" version of Mortal Kombat - to mixed results.

I think ironically this has the exact opposite problems of the 90's movies. They were silly. This is serious. They were in 16:9. This is in 2:35.1. They were 100 minutes long, these are 90 minutes per season. They were bloodless, this has blood and gore. But perhaps the biggest issue? They were expensive Hollywood productions, this is a low budget webseries - and you can tell.

The script, the acting, the sets, the photography, special effects, everything just looks and feels.. budget. Like a straight-to-DVD production or something. You still see actors like Michael Jai White and Cary-Hiroyuki Tagawa (returning as Shang Tsung), and you can tell that they put as much effort into this as they could with the time and budget they had, but it never quite reaches any pinnacles.

Still, it's perfectly watchable despite all that and I think the overall approach and tone (grounding it in a sense of reality instead of embracing the silliness again) is really and truly commendable. We see Bi-Han (Sub-Zero) and Hanson (Scorpion) and their rivalry. We see a wild episode where Raiden lands and is trapped in a mental asylum (probably the best of the series). There are decent fights at times as well, and you can really sense what they were going for, but there just wasn't quite though time, money and talent to get there. I respect their efforts though, even if they spent so much time on the season 2 Scorpion costume that Sub-Zero is literally just wearing BMX pads, they replace actors halfway through, scenes where they speak Japanese is replaced with English, the CGI is iffy and Casper Van Dien is running around as Johnny Cage screaming while he's chased by Mileena.

MK: Legacy is no big budget production, so don't go in expecting that. But despite it's shortcomings it was the first real attempt at a grounded and serious take on Mortal Kombat in live action and I'll always appreciate that, obvious constraints and all.