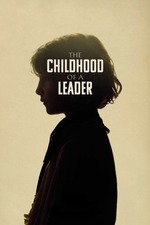 The Childhood of a Leader

”You cannot let our child run this house”

Brady Corbet is an underappreciated actor better known for his work in the indie sphere. He’s name has become an increasingly interesting one, since as of late the kid has developed an ubiquitous quality as he’s involved in both American indie features as well as international projects. At this point in his career, and let me remind you of his young age, Corbet has already worked with renowned names in the movie industry and his work is remarkably consistent and driven by ambition. These facts led me to believe that the young actor’s debut would be something curious and different which was confirmed by the buzz at Venice. The Childhood of a Leader polarized critics, leaving some in awe and others with a big question mark over their heads; but at one thing both ends of the spectrum agreed and that was that the film was bold and singular, even if to a fault, but the truth is that that tag-line drew me into the picture and made me quite excited to see it.

The Childhood of a Leader is indeed marked by its confident, ambitious quality as well as its pretention and self-importance. I too am divided. One thing is certain though, some people will hate this picture whilst others will likely love it as some did at Venice. This was made evident as I got out of the theater after the film had ended; the majority of the crowd was confused and quite irritated I must point out, as some spoke quite loudly about how they thought the movie was pretentious and in their own words: “shit”. As a matter of fact the woman sitting next to me, who kept on coughing the whole way through the fucking picture spilling her tuberculosis into my lunges, nearly shouted “What is this!?” as soon as the credits started to roll.

I on the other hand won’t call this shit. There are some props that need to be given to Corbet, though I will say that I am not of those who got infatuated and in love with The Childhood of a Leader. I quite simply just found this picture to be surprisingly involving and engaging albeit the fact that its plot was quite simplistic, ambiguous and even off-hand.

The story is set at the end of the Great War, in France. There an American family arrives and the head of that same family, “The Father” (as he’s credited), is an American diplomate that flew to France to engage in the signing of the peace treaties. But picture doesn’t follow “The Father’s” tribulations at this extremely edgy moment in history, as in fact the film chooses to follow his son, Prescott whose behavior has changed since he landed on French soil. Somehow Prescott (played beautifully by young Tom Sweet) has a absorbed the atmosphere that Europe is emanating, he seems to have engrossed the war in himself as he becomes progressively violent and commanding; soon he seems to be the head of this family.

Corbet’s screenplay has some glaring faults, but some interesting ideas too. But what’s the most commendable about his debut is the way he accomplishes a tense, eerie atmosphere through the use of fine craft. Leader’s craftsmanship is superb; here Corbet shows that he took some notes out of the directors he had worked with. The environment created is an extremely sinister and menacing one, at times scary to say the truth. Dark costumes, dim sets and a lot of scenes set at night time only helped to produce an uncanny, ghost-like ambience that was enlarged by the film’s cinematography and score.

I also have to highlight the film’s score; the thing is that I am not really sure if this is a bad one or an excellent one. As you can see the movie is indeed polarizing in every way. Scott Walker’s score is as loud as they come, truly, this is a loud motherfucking score; this is Bernard Herrmann’s Psycho up to twenty and I am not even exaggerating. The score is thunderous, showy, unsubtle and maybe even pretentious, yet I cannot help but to say that I loved it. I was possessed by it! One of the reasons I found the film to be so involving is exactly because of Walker’s tremendous instrumentation. His orchestration is pitch-perfect; this is a cacophony that rose into such levels where it actually became scary and terrifying to be seated at this movie theater. These were some of the most frightening sounds I’ve ever heard in a movie house; it was as though I was seeing a horror film ‘cause the score was so over the top, vibrant, potent and dark. This was spine-chilling at times. I found it to be one of the film’s biggest assets even though I would have to agree with the remarks that point out this score as unsubtle, showy, off-hand and plain simply unnecessary. I was still submersed by it, Scott Walker is not particularly known for these kinds of sounds, I know him as a singer-songwriter whose style is baroque-pop, so to see him produce such a heavy, gloomy soundtrack was nothing short of fascinating.

As a whole I thought Corbet’s feature debut was a successful one, even if flawed by the directors own ambition. The Childhood of a Leader is bursting with a fantastic sense of style and ambience as well as it is led by fine performances and mature craftsmanship. But unfortunately the picture couldn’t save itself from itself; the ending is the proof of the same. An abrupt, even if not totally foolish ending, makes it evident that Corbet has balls and courage to say fuck you to conventionality, but at the same time that audacity becomes nearly vexatious and pretentious.
There’s no doubt that Corbet has a promising future ahead of him, as he shows some gifted directing chops in The Childhood of a Leader. It is only a shame that the kid at times mistook pretention and audacity with content.