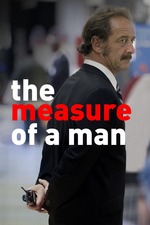 The Measure of a Man

The Measure of a Man marks my fifth attendance of a film at the Lisbon and Estoril Film Festival, and it also marks one of the festival’s biggest surprises. Even though Vincent London took the Best Actor award at the Cannes Film Festival, the film was still received with positive but stale reviews that did not make me particularly exciting to see it. However I have to say that I very much liked this picture; I found it to be a strong, gritty, well-intentioned project that very much delivers the goods.

This is not quite as exceptional as Two Days, One Night but it is a nice companion to it. Both display more or less the same reality, both approach this reality through docu-fiction and both are commanded by a phenomenal performance in the lead role. Vicent London is the actor behind that role of Thierry Taugourdeau and we had privilege to have the man’s presence after the film’s screening. It was lovely to see him as I could describe him as a seemingly modest, playful man just like the character he plays. London talked about the closeness he had with his character has he himself had been unemployed with a wife and kid before once. It was great to see an actor that delivered one of the finest performances this year will see.

Reality and fiction melt into one as they become undistinguishable; maybe that is due to the fact that these same realities are very close to the day to day life of the Portuguese people; but one should also mention that that would have been of no importance if the actors, director and all the people involved hadn’t created an environment that felt real and emotionally true. Beautifully acted, cohesive and carrying a strong sense of social awareness, The Measure of a Man proves to be a fine work that will likely be one of the festival’s highlights.