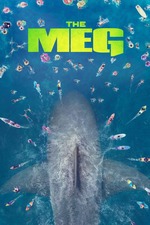 When the first asian guy died, my dad went, "They lost their calculator."

The Meg was everything I expected and honestly everything I wanted. I didn't go into this expecting the next Jaws or anything. I went in expecting Jason the badass Statham to fight a megalodon and that's what I got. And I had a blast.

First off, this is dumb. Plain dumb. This is the very definition of a dumb, action-heavy, creature-feature. I just had so much fun with this between being entertained and laughing my ass off.

The acting aside from Statham is pretty bad. It was cool to see Rainn Wilson in this, even though his character was the most annoying. The shark is pretty cool but unfortunately isn't scary at all. The script is trash. Absolute trash. You can see the jump scares coming from a mile away. Yet, I still had so much fun with this.

Overall, The Meg is a fun, b rate, cliched shark movie with some cool CGI. I'd definitely recommend seeing this with a group of friends or something. Laughing is always better in groups.

Also, is it just me or is Ruby Rose insanely hot. I mean seriously.