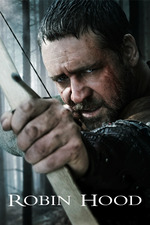 How amazing it is that England has been able to survive over the centuries. They’ve fought civil wars, the Scottish people, the Frenchs, the nazis, etc. And still, here they are.

I liked this version of Robin as a legitimate man, and his story before he became an outlaw. Still with the same characters of the original  tales, such as Marion, Little John, King John, etc. Although is hard to hate King John, it’s more like a feeling of shame or just sorry for his stupidity.

The costume design and scenography work perfectly to feel like traveling to the 12th century. The middle age folklore is there with the huge forests and unpopulated areas, the castles, small towns, and the dirty people.

It doesn’t matter if he’s doing a schizophrenic man or some kind of warrior, Russell Crowe’s characters always look like an eminence. He’s the kind of actor that doesn’t fit in a small character. And I love it.

Journey to the Center of the Earth