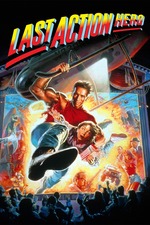 Scripted by Shane Black, directed by John McTiernan and the scenes set to 80s rock, Arnie couldn't fight Charles Dance and Tom Noonan to a better backdrop than that. At least not when taking into account that the entire thing is a meta send-off of his 80s Hollywood persona.

Inexplicably, this films passed me by back in the 90s, probably because it tanked at the box office. I'm so happy I decided to give it a try now, though.
Anything written by Black gives me pleasure, of course, and McTiernan was a pretty good director back in the day.
As for kids being the center of attention, it's not my favourite thing by far, but this kid is alright.

Pleasingly, for a film riffing the action genre, Last Action Hero also brings its own share of exciting set pieces and stunts.