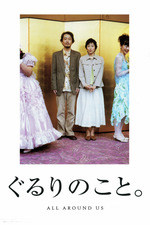 All Around Us. The tone is immediately distinctive, with some of the feeling of classical American cinema, mostly in the deployment of entertaining character traits. But it also starts boldly in the middle of a discussion filmed in alternating closeups (the wife getting a foot massage) - so not a slavish classicism. At first I felt that the entertainment tropes threw the tone off at times, but I quickly got on board with the project. Its ambition is considerable, with the contrapuntal running theme of the horrific crime trials used to underline the husband’s philosophical-but-engaged status. But the central human story is no less ambitious in its way: at first we see the man’s desultory qualities and his limitations, and how they force the woman into a controlling state. But then she slowly crumbles after the loss of the child, until the amazing, very long take (one of two in the film) in which the man’s unshakeable compassion, perhaps not often expressed before this, plants the seeds of the relationship’s recovery, which takes place slowly, via the woman’s conversion to artistry. Throughout, the density of invention in details is amazing: nearly every character development is surprising even at the micro level of behavior; counterpoint is the rule, and the often-light tone is coextensive with a quiet sense of originality in the depiction of people and in the development of events. The scripting, the planning, is as important to the impact as the direction: the evolution of the film is toward wisdom, and none of the bad aspects of life are withheld to make that evolution easier. Really a great movie.