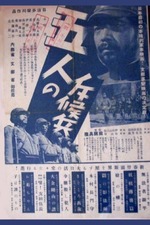 Five Scouts. Extremely visually dramatic: wild tracking shots, ominous closeups and pans, low angles on vast expanses of space, some use of telephoto compression. And the action scenes are grimly imaginative, like the one where enemy soldiers hidden in bushes drop into the water as corpses, in the foreground of the shot. But the propaganda purpose of the film made it feel false: every soldier is gentle, compassionate, and quivering with feelings; the whole platoon mourns when one guy doesn’t come back, after they just lost three fifths of their number in the last battle. (15 Jan 2014)

I liked the film a lot this time: my appraisal of the good and bad stuff is much as it was in 2014, but the good stuff impressed me more and the bad stuff seemed less important. Tasaka’s modernism, his willingness to push form to the surface, feels more like 50s Hollywood action than 30s anything. There’s a baseline of realism in the unity of place and the concentration of the story; in the observation of Army ritual (not un-Ford-llike), like the repetition of verbal orders; and in the exclusion of private lives. And then there are fanciful aspects, most notably the idealized, universal kindness and gentleness of the army at all levels. Of the film’s many spatial/kinetic virtues, the most mysterious and maybe the most effective to me is the way that the subjectivity of the camera sometimes becomes an evocation of spatial experience, as when the scouts make their way through reeds to reveal the vastness of a river view, in an inspired use of location and choice of camera position. Tasaka’s formal imagination is sustained throughout, and the storytelling is closely allied to the visual style: Tasaka uses surprise to keep us off-balance, both in the middle of action and in more mundane scenes (e.g., the timing of the return of each scout to the fort, usually announced by off-camera sounds interrupting an interior scene). There’s too much creativity to ignore, even if the strange idealization of the military occasionally takes the film over and obscures other aspects. (17 Mar 2021)