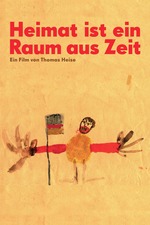 Heimat Is a Space in Time. Even a few randomly chosen moments of the film make a strong impression. The images are extraordinary both in composition and in the density of light and shade: this density renders the images almost abstract, and despite their naturalism one imagines that the colorist worked hard. Too many stunning images to catalog: I think first of the wide shot of a strange structure miles away from the camera, at the end of a long road; or a shot of the sea, the water compressed into a horizontal strip of the frame, the blacks and grays of the strip shifting with the waves. The images, seemingly gathered via intense scouting or patient collection over years, could constitute an impressive non-narrative work in themselves; what is most remarkable here is the work of subordinating them to a verbal history that is organized as a narrative. The connection between images and words is established quickly with clear correspondences (like photos of the authors of letters) but soon becomes much looser, though few if any images are allowed complete freedom from the historical narrative. Many of the locations are quiet and empty (there may be a loose progression to greater activity as the narrative moves toward the present; this progression could be partly due to the need to use remote locations to harmonize with the distant past), and, throughout the film, the hushed naturalness of the sound track enhances the film’s contemplation of the past, with the immediacy of environmental sounds quieted to a subordinate, though continuous, presence. Even non-quiet things feel hushed: there are long takes of boxcars passing near to the camera, the groaning of their weight on the rails audible; yet the looming mass of the trains is damped on the sound track to create a regulated, ominous mood that feels like a Dreyer film. The family history is told through letters and other documents (there are no moving images of any person who figures in the narrative), including government or institutional records and recorded conversations. The first part of the film leads through the Nazi concentration camps, with the most memorable authorial device a long scroll through official lists of Jews shipped to camps on trains, with family members appearing on the alphabetized lists at intervals, while the letters from their last days of freedom are read on the sound track. The effect is Dreyer-like again, both morbid and slow, mechanical, inexorable. The narrative takes some unexpected detours in the postwar years, when politics takes the film’s foreground: Heise’s family is socialist or communist for generations and located in East Germany, but one of the most vivid passages is built around the sensual, almost violent love letters of a West German suitor of Heise’s mother, who drops sadly out of her life before her marriage to Heise’s father, taking with him the unruly energy of the West. The ideological persecution of Heise’s academic father in East Germany is documented in great detail and inevitably suggests a parallel to the persecution of his schoolteacher grandfather by the Nazis (for his marriage to a Jew). No small part of the attraction of the project is the philosophical/intellectual quality of the communications of Heise’s forebears, evident from the film’s first few minutes. In the end the big picture of the film is as rewarding as its immediate textural impact.