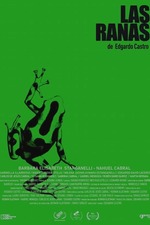 Las Ranas. I expected little from the film but started liking it quickly. I can’t easily discern the circumstances of the production: It’s shot documentary-style, presumably with non-actors; but they enact a clear story that’s both intimate and legally incriminating, so hopefully not their own. The film’s narrative is disguised by Castro’s desire to let events linger in pockets of time: it’s not only a style but also part of the film’s concept, of the characters stoically executing long-term plans that are arduous and time-consuming. The first scene that got my attention was the leisurely breast-feeding scene, which established the film’s rather ambient rhythm. Yet most of the scenes that play out at length serve a clear narrative purpose: the protagonist’s street vending (followed by the digressive scene of her ordering food, counting the cost per item); the long multi-bus rides to the prison facility, with the first trip embroidered with the fascinating moment to which Roger Koza’s review drew attention, of the protagonist’s von Sternberg smile at the aggressive behavior of another woman, whom we don’t yet realize is another “rana” who will appear throughout the movie. There’s no telegraphing, no emphasis on narrative payoffs: all we get at the end is an understanding of the nature of the mission, though no details about the reason for it. In fact, there are no scenes at all that bear particular emphasis, if one excludes the fascination of the unexpected interlude of the women inserting the objects they are transporting into their vaginas. None of the actors need to display acting skill or even camera presence: they seem to exist only for their actions to be documented. The ambient style lets the gradual revelation of the film’s strong narrative spine surprise us, and its brevity feels right: it ends when the last puzzle piece falls into place. An admirable film, neither expressive nor trying to be, but delivering reality with lucidity: one imagines that Rossellini would have liked it.