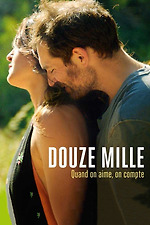 Twelve Thousand. An uncanny film, challenging in multiple ways and successful in meeting each challenge. The subject of struggling for income lends the film realist credentials - though the opening shot of the protagonist dancing in the street foreshadows abstraction to come. The first domestic scene is daringly erotic, and a sense of urgent sexuality permeates the couple’s relationship; but financial issues merge with sexual ones almost immediately, and continue to do so throughout the film. Yet Trebal has no interest in the default socially conscious playbook of poverty sucking up the energy needed for love and sex. The temporary parting of the lovers is intriguingly inflected by a discussion of whether the man’s fidelity during his absence is really important: the discussion hews to expected gender norms, but is written and directed to emphasize the lovers’ bond rather than their differences. This issue is never put to bed, as the plot puts temptation in the man’s way often, and his fidelity remains a central issue without ever being turned into a test of virtue. Elements of musical abstraction creep back into the film: the protagonist’s anomalous gift for street performing; his co-worker’s dance-adjacent demonstration of the technique of cleaning a chemical vat; and an out-of-the blue, atmospheric line dance at a bar. This last scene felt like an expressive peak - but, to my amazement, many subsequent scenes crested just as high, and Trebal manages to string together such privileged moments without losing the balance of her theme or her characterizations. Surprises become the norm; supporting characters receive Trebal’s full attention before yielding the narrative center. So many scenes feel like the best scene in the film: the protagonist’s remarkable phone negotiation with an accountant at his old job, the accountant’s silences as expressive as the man’s unexpectedly effective arguments; the intense encounter with the co-worker’s mother, charged with a history of pain that’s conveyed with a few brush strokes, and with overt sexual desire that complicates our response; the briefly reunited couple dancing in the park while assessing their life together, an audience gathering around them as a reflexive touch. A seemingly secondary character, the co-worker’s sexually promiscuous bar acquaintance, abruptly moves to the center of the story, and the bar’s line dancers are revealed as her gang of thieves, their heists choreographed as dances. (Was a factory guard killed by the protagonist to enable this section of the film? A troubling detail if so.) The power of this almost musical section comes from its connection to the dark side of the film’s theme: that the accumulation of money is so sexualized that it delays and threatens the love reunion that it was supposed to enable - a development that Trebal fully confronts. Near the film’s end, there’s one final privileged scene, in which the previously unseen accountant solves the protagonist’s money problems and momentarily becomes the object of the film’s fascination, via the transfer to her of a token that belonged to the factory thief. The film ends with a gentle sexual affirmation that Trebal films using only one half of a champ-contre-champ, a form of découpage that she employs a few times in the film. I was bowled over by the cinematic excitement that flowed freely and in various channels throughout the film, by the effortless thematic integration of the realms of sex and money, by the stylistic integration of musical tropes big and small into a realist subject, by the distribution of sympathy in all directions. A crazily ambitious film, probably a great one.