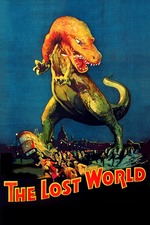 The Lost World itself was almost nearly lost to time. The DVD I watched it on came with an essay “Secrets of the Restoration” by Serge Bromberg, which detailed the adventure to piece together the best possible version of this film, lasting for over 25 years. In 1929, almost all the prints and negatives were destroyed— and since this was done only a few months before King Kong was announced, some theorize it was done to pave the way for the giant ape, which featured a remarkably similar story to The Lost World. But with the discoveries of various film reels, a Czech negative, an old film trailer, and advancing technology, several restorations (dating 1998, 2000 and 2016) were able to culminate with the best approximation of how this film would have looked in 1925.

And for such an early film its remarkably ambitious, featuring a wealth of prehistoric creatures (50 different models were used!), and even several shots with animated creatures and humans in the same frame. Its wonderful special effects work is just as pioneering as the pioneers in its own story. A story that hops from London to Venezuela, and charts a journey to find creatures that’ve supposedly been dead for millions of years. The imagery throughout is brought to life with colourful tints, gold, blue, green and red.

And while the narrative was rather straightforward, and some of the character relationships felt forced or underdeveloped— especially in terms of the run-time— the film as a whole still holds up quite well. And I can’t even begin to image how much the sight of a Brontosaurus rampaging through London would have impacted audiences in 1925!