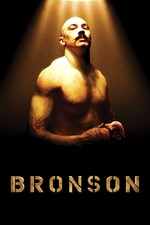 This film is absolutely brilliant.

Before I watch Only God Forgives for the first time (it will be the second Refn film I've ever seen), I decided to go back to this little gem, Bronson. My first introduction to Mr. Nicolas Winding Refn

Refn's visual creativity is a wonder to watch. The cinematography, set pieces, and even the lighting spells 'artistic flair' like a boss.

Tom Hardy gives his best performance as Charles Bronson (not to be mistaken with Charles 'Death Wish' Bronson), Bronson is claimed to be Britain's most violent prisoner.

The film manages to be darkly hilarious, sublimely surrealist, and visually brilliant.
The soundtrack is excellent. A combination of techno and classical music helps make the film a pretty incredible experience; it reminds me of what 'A Clockwork Orange' did with Alex's decent into madness. Refn has his soundtrack put in appropriate times, and it even elevates the film's definition of sanity. Because this movie....is so fucking insane. The soundtrack though.....it's something that I would listen to over and over again (even when writing this review).

What I loved about Refn's storytelling is that he's not afraid to take a decent into madness and insanity. And for that, this maverick gets a medal from me.

Now, there were a couple of bits that should've been done better, but I understand why it's done that way.

I loved Bronson so much. It's just such an excellent way for me to be introduced to Refn, and now I should be prepared to see his most recent picture: Only God Forgives.

A Monster in Paris