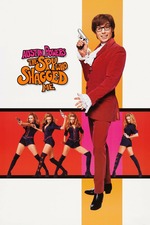 Austin Powers: The Spy Who Shagged Me

this was, oddly, one of my favorite movies when I was growing up. I’ve seen it dozens of times, but I don’t think I’ve seen this since I’ve turned 13. I’m still aspiring to be Heather Graham in that blue jumpsuit, sliding down poles and driving that American flag convertible, but it’s just doesn’t age quite like the original. that said, here are some things I noticed:

- Dr. Evil and his associates are wealthy because they’re the primary shareholder of Starbucks, implying that the primary shareholder of Starbucks are trying to take over the world
- Austin and Expedition literally look into the camera and tell the audience not to worry about the time travel logic
- Mike Meyers is performing as a character with the energy of another character he’s also playing in the film and honestly it’s genius
- This song uses “I’M A BELIEVER” a mere two years before Smash Mouth would reinvent the song as we know it for the OTHER Mike Meyers movie that changed my life...Shrek
- Madonna doing the original song for this and literally a James Bond movie years later, and they both bang
- honestly a lot of my early Star Wars knowledge came from this movie since we owned this on VHS(!!!!) but not the original trilogy. I remember my mom explaining the “Death Star” joke like “that’s the big ship in Star Wars”. like this movie came out the same year as The Phantom Menace
- in two, “exterior” scenes Meyers and Graham are wearing the EXACT same costumes like who gives a fuck
- they traced Fat Bastard back to Paddington station
- its so crazy watching this and remembering the jokes I thought were HIlarious and now I see they...werent really jokes at all, someone was just saying a funny word
- there’s a scene where Dr. Evil sounds silly because he’s using ‘90s references in the ‘60s, but I’m watching this movie 20 years since its release and they sound JUST as silly
- “ouch, baby. very ouch” made me laugh out loud for so long
- this movie takes place in 1969, the year when Americans first landed on the moon. in this film, however, Austin and Felicity go to the moon which means, in the APCU, it’s canon that Austin Powers was the first man on the moon
- when I was a kid, I remembering thinking this movie was actually romantic and watching it now it kinda is
- this movie literally ends with “maybe the real mojo was in me all along”

and finally, it will never not make me laugh when I remember Dr. Evil is based on Lorne Michaels