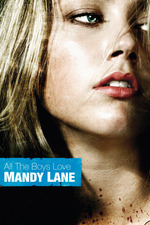 All the Boys Love Mandy Lane

All the Boys Love Mandy Lane... Just like in Snakes on a Plane, the title of this film sums up perfectly what this movie is all about. Sure, there are no correlation between those movies other than that, and the fact that both being cheesy, badly written horror flicks, it was just a thought that popped into my head as I watched it.

It's pretty obvious that all the boys DO love Mandy Lane, even to the point where they are willing to throw themselves head first off roofs to get her attention... This is not a good film, and even though Amber Heard is a damn good-looking woman it didn't make up for the lousy writing, the cringeworthy awkwardness, deliberate or not, the poor attempts at "artsy" cinematography and the fact that for nearly 2/3 of the movie it's incredibly boring.

It's not like this is one of the worst films I've ever seen, it's just so dull, and it takes itself so seriously. It's been 8 years since its release, and people still watch it, so it seems like one of those flicks that could get itself a little cult status going for it, as I'm sure there are some guys out there who need a daily dose or two of the leading actress, if you know what I mean. But the problem is of course that it's not like this is a film that's so awful it's good either. It just is a bang average horror/slasher type film, with only a little bit of entertainment value going for it.

I don't know if it should be worrying that in a film with so many girls, Garth the Cowboy is the second prettiest person in it.. You tell me.