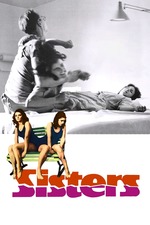 After 25+ years of cinephilia, I'm ready to call it: I don't really get Brian De Palma. He's clearly talented — an incredible crafter of moments, if nothing else — but he reminds me of talented people who never really put forth their full effort so they can always excuse flawed work. De Palma could direct a masterpiece if he really wanted to.

Sisters is a case in point but also makes clear why people have recognized De Palma's potential for decades. The plot is slight (because who cares about plot, so why put much effort into it?), but several extended sequences are a lot of fun: Tracking actions and people witnessing those actions via split screen, for example — it's delightful to see someone duck around a corner on one half of the screen and pop up around that same corner on the other half, as people who'd like to see them come into frame.

And the extended hypnosis sequence at the end seems like it was rifled for everything from The Parallax View to Get Out.

The most daring thing about the movie — and in some ways, the most obvious break from Hitchcockian influences: Shoes are left undropped. Order is not restored. Some things are left broken, and may never be repaired.

At the same time, it's not clear if De Palma gets, say, the depth of symbolism of having a black man swallowed up by a white couch in a white apartment, never to be seen again. He toys with it, but doesn't seem to recognize that there's dynamite under that surface if only he cared to look deeper.