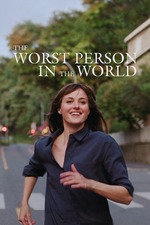 A splendorous journey of a young woman’s life as she attempts to find herself whilst being entwined in relationships. A rather typical plot line but despite this the Worst Person in the World manages to be anything but typical. It is intimate, honest, blunt and at times obscure but never without reason. It paints a portrait with many layers and with many differing colours and brush strokes. Julie is a complex person, therefore we get a complex film. Its complexity is never confusing however, it always mirrors that of Julie’s state of mind. She is ever-changing, constantly in transit, as is the film and as are we watching it all unfold.

This film, more than anything is about the journey to finding one self and it explores this in two different ways whilst posing these exact question to its viewers at the same time. Those questions being, does the journey ever actually end, and does finding yourself always have to come at the expense of others? Although this film is very much about Julie we only ever really see her in relationships. She is independent and driven yet she exists alongside a partner. This is the key to the complexity. Are these relationships hindering her personal journey or are they in fact helping her in ways she isn’t even fully aware of. Therefore there is simultaneously a focus on the relationships we have with others, what we share, what we learn with them and how that in fact does impact our character more than we know. Self awareness is usually depicted as something achieved only in solitude but this film shows quite the opposite and insightfully so. Relationships can bring out the best and worst in us and that can be a good thing, they are not essential but they aren’t as corruptive as they are always made out to be. I was really struck by this ideology because it’s never really been displayed before in such a way as this.

Aside from the psychology of it all, The Worst Person in the World is a beautiful film that romanticises life in the best way possible, in the fact that everything we see that makes life look so sweet seems absolutely possible. It’s all about perspective and attitude. Because of this, this film really has the ability to strike you emotionally in a slow yet extremely effective way. The camera always lingers just a little longer than what we’re expecting to truly capture the emotion being conveyed. This along with the fabulous script and some of the best characters ever brought to screen makes for the best coming of age story that isn’t for angsty teenagers but instead for angsty adults. And we sure as hell needed a film that does just that.

Side note: putting this on the list alongside Licorice Pizza of films that make me want to run down a street .